# How to send bitcoin step-by-step 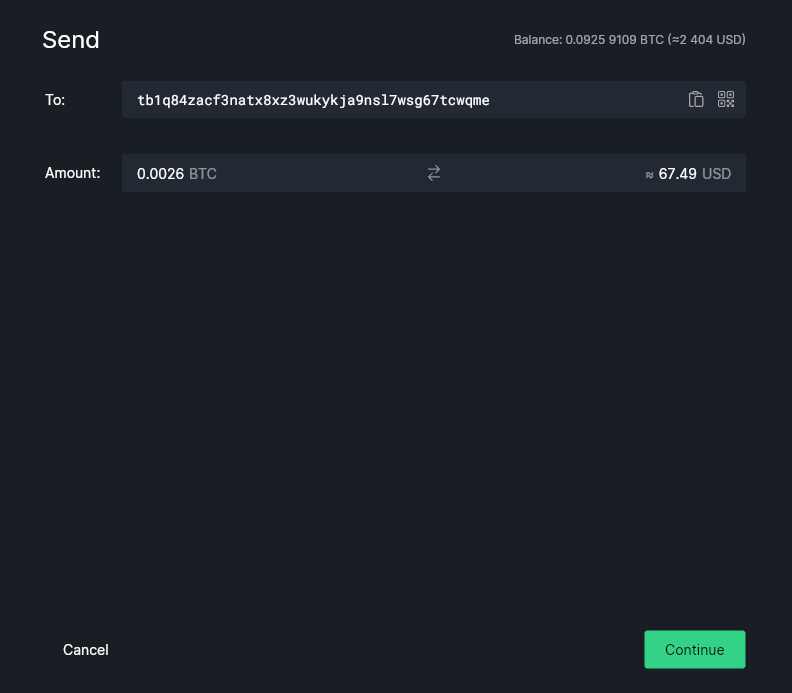 A coin is an unspent transaction output (UTXO), a chunk of bitcoin which can be sent in a future transaction. In the Wasabi wallet Send tab, you see a list of all the coins you can spend. You can get a coin by first receiving them from someone else, for example by earning them or exchanging them for fiat currency. You can spend one or more coins by selecting them in the Send tab, if your payment amount is below the value of the selected coins, then you will receive a change coin back.

Every time you receive a payment, you first must label the observers who know this address is yours. This transaction metadata is used to build a cluster of which people know about your coins. For example, if you receive a coin from Alice, then the cluster is Alice. If you now send half of this coin to Bob, then the cluster of your change coin is Alice, Bob. The goal is to know the observers who know about your coins and try to reduce their number for each coin.

When you send a bitcoin in a regular transaction with one input and two outputs, then your change coin can be linked to this one input. There is a 1 in 1 chance to find this link and no plausible deniability. Thus, Wasabi shows this coin with an anonymity set of 1

In a Wasabi CoinJoin, many peers register coins in the input of the transaction, and in the output, there are several equal value coins, for example, 100 coins worth exactly 0.1 bitcoin. This means that when looking at one of these CoinJoin outputs, there is a 1 in 100 chance to find the corresponding input. Thus the higher the anonymity set, the more your post-mix coin is delinked from the pre-mix history. Wasabi shows you three levels of anonymity sets:

Similar to the Receive tab, you must label every new address with the observers who know that this is your address. In the Send tab an address is automatically generated to receive the change amount. The observer of a sending transaction is, of course, the receiver of it, as well as any other third party that will find out about it, for example, a payment processor or an exchange. This metadata will be used to build an accurate cluster of observers who know about your coins. A label is not required (except in edge cases) when you send an entire coin, as there will be no change left.

In the Amount text box you can specify how many bitcoins the receiving address will gain. If it is below the value of the selected inputs, then the leftover value will be sent to an automatically generated change address of yours. You can send a whole coin by selecting the Max button, which will build a transaction with only one output, the receiving address, and no change. You can also see the current US Dollar value of the sending amount.

Every transaction must specify a fee which incentives the miner to include it in a block, it is calculated by value of inputs - value of outputs. The higher the fee per virtual byte (vbyte) transaction size, the more likely miners are to confirm this transaction. Wasabi uses Bitcoin Core's smart fee algorithm to estimate the time it will take to confirm at the given fee level. You can change the fee by moving the slider, or even specify it manually by activating this functionality in the settings. By clicking on the fee in the brackets below the slider, you can cycle through displaying the total bitcoin amount, sats per vbyte, percentage fee of sending amount or US Dollar equivalent. 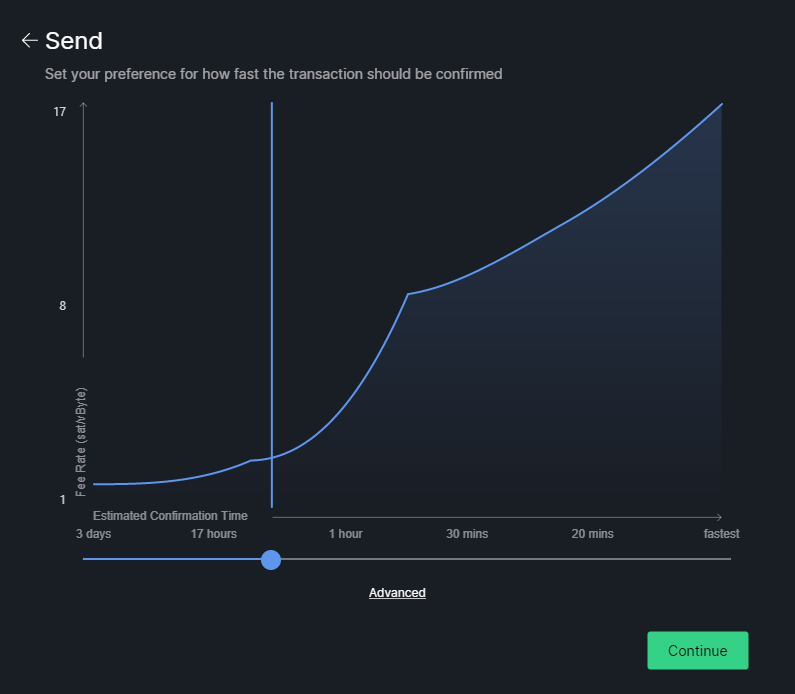 In some cases, there is very little demand for block space, and then Wasabi will set the minimum fee of 1 sat/vbyte.

When using Bitcoin Core's smart fee algorithm to estimate the time a transaction will take to confirm given the current mempool, the algorithm considers the historic data for transactions in the mempool and in recent blocks.

If, after you select the highest fee for a send, other people decide to send coins using even higher fees than you selected, their transactions will be placed ahead of yours in the mempool.

The placement of a transaction in line to be confirmed in the mempool is an ongoing auction for block space.

If you have a transaction that is high-priority and you really want it to be confirmed ASAP:

For a deeper dive into the fee estimation process, this article (opens new window) is worth reading.

In the Settings tab you can activate the option to set a custom change address.

This will show a second address field in the Send tab, where you can paste an address that will be used for the change output of the transaction. The specified sending amount will go to the first address, the value of input coins - payment amount - fee will go to this change address. If no address is pasted in this field, then it will pull an address from this same wallet, the same way as the default.

Once the transaction is signed, Wasabi will connect to a random Bitcoin P2P node over Tor and provide this transaction, then it will immediately disconnect. This first node will gossip the transaction throughout the network, then miners can include it in a block.