A coinjoinopen in new window is a special Bitcoin transaction where several peers get together to literally join their coins in a single transaction. They collaboratively build a transaction where each of them provides some coins as inputs, and fresh addresses as outputs. The concept has been around since the early days of Bitcoin, and it was formalized by the great Greg Maxwell in this awesome introductory threadopen in new window.

The goal is to gain privacy by breaking the link of which input "pays" which output so that none of the outputs can be attributed to the owner of the input. WabiSabi enables centrally coordinated coinjoins with variable amounts in a trustless (meaning nobody can steal) and private (meaning even the coordinator cannot spy) manner, as described in the WabiSabi paperopen in new window.

At first wallet load, you can choose one of the coinjoin strategy profiles: 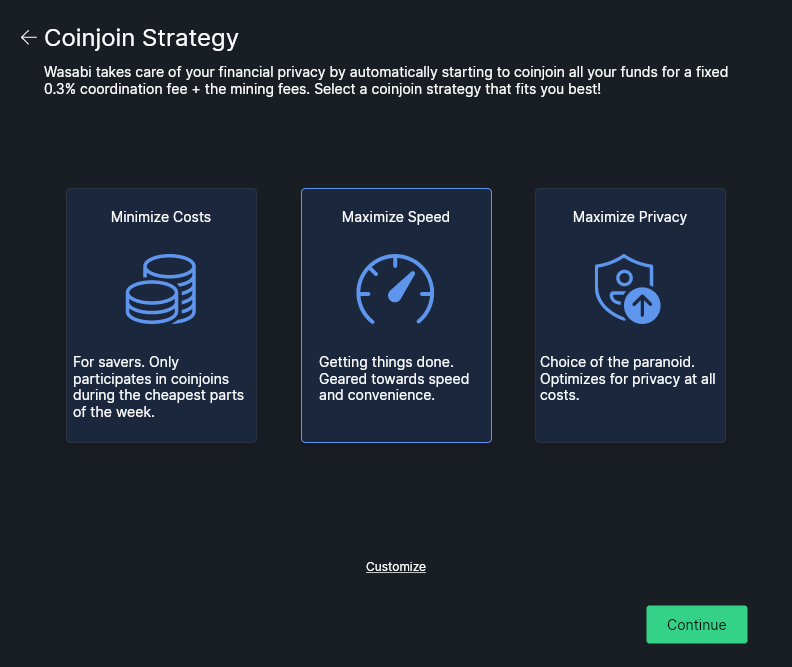 By default, Wasabi starts automatically coinjoining your funds when the total value of the non-private coins is equal to or above the Auto-start coinjoin threshold (0.01 BTC by default). Automatically start coinjoin can be disabled from the coinjoin settings. In case you want to start the process manually, then click the play button; if you want to stop coinjoin, then click the pause button.

Once a coin achieves enough privacy (reaches the Anonymity score target), then the corresponding amount will show up in the wallet's main view as "PRIVATE".

Notice that it is not yet possible to coinjoin from a hardware wallet, the keys must be "hot" on your computer.

The round starts either as soon as the number of registered inputs reaches the maximum, or after the input registration time is reached and as long as the minimum number of inputs is satisfied. Just leave Wasabi running in the background of your computer, as coinjoining takes time.

WabiSabi protocol requires 5 steps to successfully create and broadcast a coinjoin transaction to the bitcoin network.

During the input registration, the client selects how many and which coins will be registered for coinjoin. These coins need to be confirmed on the Bitcoin blockchain. In the background Wasabi generates input proofs, which are signatures over challenge messages, made with the private keys that lock up the coins. With this, the coordinator can verify that you actually own these coins.

Wasabi wallet generates a new Tor identityopen in new window called Alice for each input. She is a separate entity, and for every round you use a new Alice who is not linked to any other input or previous connection. With Alice, you send the input ownership proof to the coordinator.

The Wasabi coordinator now verifies that:

Only when all these checks are passed, does the coordinator allow this input to be registered. The coordinator creates and sends a credential back to Alice, which has the same amount as the input minus fees.

The input registration phase ends when either: the number of registered inputs reaches the maximum, or when the time elapsed and the minimum number of inputs is satisfied.

There are many users registering their inputs (with different Alice for each input) in the first phase, and this takes a while. The connection confirmation phase makes sure that all of them are still online and ready to continue. The coordinator verifies the unique ID from each Alice, and if everyone is still communicating. The coordinator sends a zero value credential to each Alice for each successful connection confirmation.

The round is abandoned and re-started if too many Alices have dropped, for example when their Wasabi is shut down, or when their Tor connection is temporarily broken. The connection confirmation phase ends when all Alices have provided their unique IDs, or after a timeout and the number of online Alices is still larger than the minimum number of inputs.

Now that all peers are online, we are ready to proceed with the output registration phase of the round.

Next, your Wasabi client generates multiple new Tor identities called Bob, which are in no way tied to any Alice. Bob sends to the Wasabi coordinator:

Because the coordinator can verify its own credential, it knows that this credential came into existence after an input of at least this much value was registered. However, it cannot know which input exactly.

The output registration phase ends when the value of cleartext outputs is equal to the value of inputs, meaning that all Bobs have registered. If after a timeout not all outputs are registered, then this round is abandoned, the missing inputs are temporarily banned, and a new round is started.

Each Alice does the following:

The signing phase ends when the coordinator has received all the valid signatures for all the registered inputs.

The coinjoin transaction has been successfully built and signed, and it is now ready to be broadcast to the peers of the Bitcoin network. The coordinator sends this transaction over the Tor network to random Bitcoin P2P nodes, and from there it is gossiped to other nodes and miners. To save on mining fees, the target confirmation time is roughly 24 hours.

Wasabi Wallet has automatic coinjoin. It is done by the built-in automatic coinjoin "robot". The robot contains instructions/settings, like how often and when to coinjoin. The user is able to specify these settings in the Coinjoin Settings dialog, according to his own preferences. The wallet ships with default settings, which are good enough for most users. 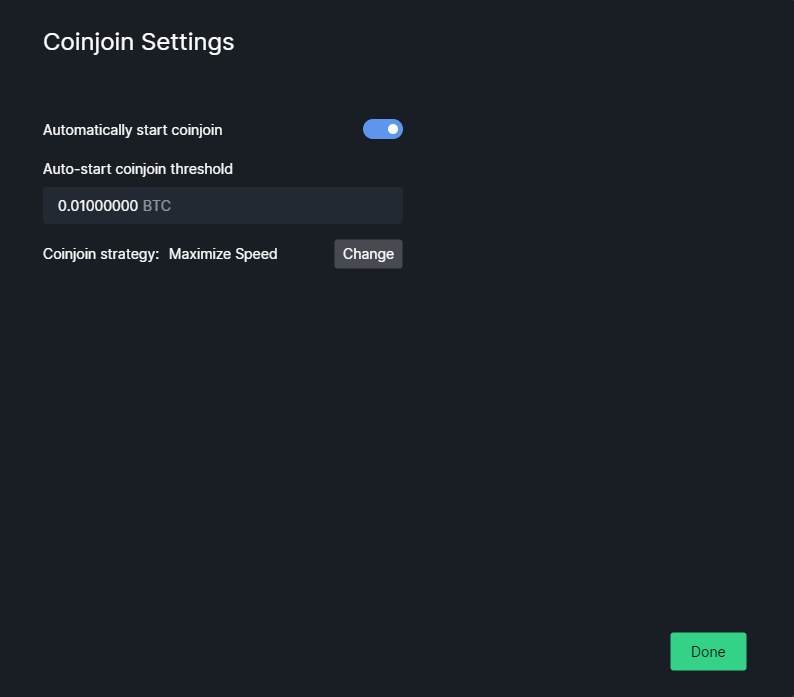 This setting is active by default.

When this is not active, the user will have to manually press the Play button in order to start coinjoining.

For example, if the non-private balance is 0.005 BTC and the Auto-start coinjoin threshold is 0.01 BTC, the user will have to manually press Play to start coinjoining.

If you have some small non-private left overs: you can coinjoin these by pressing Play, or wait until you receive more funds. If you want to always automatically coinjoin ALL your coins, this can be set to 0 BTC. Note that you might pay relatively more fees for coinjoining smaller amounts.

Wasabi ships with 3 coinjoin strategies: Minimize Costs, Maximize Speed, and Maximize Privacy. Each of these contain different configurations. They determine the Anonymity score target, Coinjoin time preference, and if Red coin isolation is enabled or not. 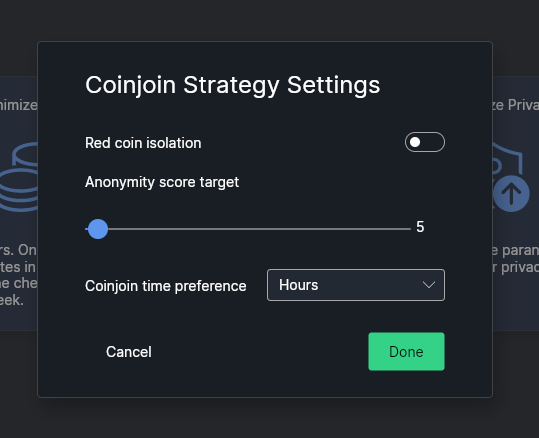 The default strategy is Maximize Speed.

It is possible to make your own custom strategy by using the customize button.

Here's a list of Wasabi coinjoin examples and how they appear on a block explorer: