# The importance of running a full node

When running a Bitcoin full node, you define the precise monetary rules that you voluntarily agree on. Nobody else forces this choice upon you. Thus any sovereign individual who wants to claim financial independence must run a full node. Once your own rules are firmly established, your software discovers other nodes in the Bitcoin peer-to-peer network which do not break your rules. These peers send you transactions and blocks which are valid according to their set of rules, and you verify for yourself if they are also correct for you. If one of the proposed transactions breaks your own rules, then you mark it as invalid, disconnect from and ban the node who sent you the malicious transaction.

With your full node you define, verify, and enforce the rules of your sound money Bitcoin.

Only by running a full node, do you verify by yourself that the money you receive is actually valid bitcoin. You do not trust an external third party, and thus you also do not leak any sensitive financial information.

# How does Wasabi use your Bitcoin full node

Wasabi currently has a work in progress partial Bitcoin Knots integration. As of now, the zkSNACKs coordinating server broadcasts BIP 158 block filtersopen in new window to all Wasabi clients, who locally check if the filter hits for their public keys. Then you know that this block has a transaction of yours included, or maybe it is a false positive.

The zkSNACKs server has to be trusted to serve correct filters. This current work in progress integration does not verify consensus within Wasabi.

If a full node is connected to Wasabi, then the relevant block is fetched from this trusted node, and not from a random P2P node. Wasabi also queries if your local mempool has unconfirmed transactions that are of interest to you. Further, your full node is used to estimate the current mining fee level based on the bitcoind smartfee algorithm. Your full node is not used to broadcast your transactions, as this is done through a random peer-to-peer node with a new tor identity, which is better for your network-level privacy.

The future goal is that the local full node (Knots) is used to generate the BIP 158 block filters from the verified blocks. Only then is there full verification, and no trust in the zkSNACKs server.

Wasabi Wallet ships with Bitcoin Knotsopen in new window. This means that every Wasabi client has the necessary software to run a Bitcoin full node and define, verify, and enforce monetary consensus with bitcoind, but this verification is not yet used within Wasabi itself, it is a work in progress. By default, bitcoind is not started together with Wasabi. This must be activated explicitly in the settings because this is a bandwidth, CPU and storage-intensive program. It is optional to keep bitcoind running even after Wasabi Wallet is shut down, so as to verify blocks as soon as they are received. 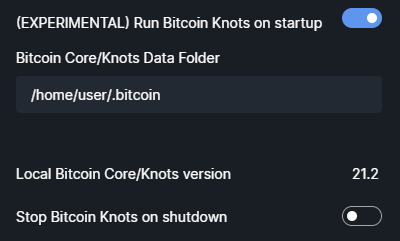 If you have a Bitcoin full node already pre-installed on the same computer you use to run Wasabi Wallet, then Wasabi will use your node by default. You do not need to change anything in the settings, it should work plug and play. This is especially useful to save on bandwidth, as you have already downloaded and verified a block with your full node, so you don't need to download it again with Wasabi.

If you have a Bitcoin full node already on a remote computer, then Wasabi Wallet can use this too. In the Bitcoin settings, specify the local IP address and port or the Tor onion service of your full node.

# Verify that Wasabi is connected to your full node

There are two ways to confirm that your Wasabi client is connected to your own full node.

First, in the Wasabi logs. Once you receive a transaction Wasabi downloads the block containing that transaction from your node, and in the logs you should see: Block acquired from local P2P connection.

Second, by checking the connected peers inside your full node. Wasabi will show up as one of the connected peers while it is downloading a block. You can check this in the Bitcoin Core / Knots GUI by clicking on Window -> Peers. During the period when Wasabi is fetching a block, it will show up in the User Agent column. Alternatively, you can use the Bitcoin RPC call bitcoin-cli getpeerinfo and see the Wasabi client listed.